About six years ago (wow - seriously, I'm surprised at how time flies!) I wrote this blog post where I pretty much nitpicked some of the quotes which supposedly show how Catholics believe the Pope to be God in the flesh or something along those lines. It ain't really much, but I just added a little something to the post - specifically, to the quote attributed to Cardinal Sarto (Pope St. Pius X) about the pope "being Jesus Christ hidden under the veil of the flesh." Otherwise it's still the same old post, full of sharp nitpicking from a six-years-younger-me. Click on the link to find out.

(P.S. No, I can't really make any more promises to be active on this blog; the only thing I can say with certainty is, I'm not letting this blog die down. Yet. But who knows what tomorrow will bring?)

(P.P.S. So I'm advising readers, y'all better keep what you're reading here in whatever way you can - no need to ask me. Save it, print it, copy it, torrent it, whatever. Nothing is totally permanent, not even on the Internet. So if you feel something interests you - go ahead, feel free. This is probably one of the few instances where stealing is allowed - hey, maybe even a good thing. ;))
Posted by Patrick at 12:14:00 PM No comments:

Matthew's Infancy Narrative, 03: From Solomon to the Exile


The scroll of the genesis of Iēsous Anointed son of Dauid son of Abraam.

Since it's Christmas, why don't we have something a bit more timely? This time I'm gonna look at Matthew's infancy narrative.

(NOTE: This is a rehash of something I once did over at Catholic Answers Forums. I never got to finish the - admittedly one-man - discussion there as in many of my other threads, but at least I'd like to see this one get a proper closure.)

Just how many versions of Tobit are there? Part 01

Here's a topic I've found very fascinating ever since I first encountered it.

A History of Veronica, 02: Abgar and the Image of Jesus, Part 01

Picking up where I left off:

It is in the 8th century that in the West we begin to see Berenice/Veronica connected with an image of Jesus on a piece of cloth. But, before we get to that, let's first talk about the earlier story of King Abgar and the image of Jesus he received known as the Mandylion.

I've put up a transcription of the earliest manuscript of the first Ordo Romanus on the pages section (Cod. Sang. 614, ca. AD 850). Folks who can read Latin will notice that the text is in some ways different from the 'longer' version E.G. Atchley used in his 1905 Ordo Romanus Primus, which is a combined version of the texts of Jean Mabillon (Museum italicum, vol. 2, 1689) and George Cassander (Ordo Romanus de officio missae, 1561). I've written out the abbreviated words in full and added Atchley's paragraph numbering for easier reference. Enjoy.

A History of Veronica, 01: The Woman

Been a long time since I posted here, ain't it? :p

If you're Catholic, chances are you've probably heard of Veronica and her veil by which she wiped Jesus' face as He carried His cross to Golgotha. Despite her not being found in the New Testament, she is commemorated in the sixth Station of the Cross, and in addition, some Jesus films choose to include her in some form or another - examples of this would include Jesus of Nazareth or The Passion of the Christ (the clip below). The story is popular, methinks, because it epitomizes compassion: a woman helping the Lord in the smallest way she could in His hour of need and being rewarded for it in the form of an image on her veil.


But here's the thing. What do we really know about the woman we call 'Veronica'? And how did her story develop over time? And what does the so-called 'veil' of Veronica have to do with it?

Bread, the so-called "staff of life," has a long history - it is one of the oldest foods mankind has prepared, dating back to the Neolithic era. The first bread produced was probably cooked versions of a grain-paste, made from roasted and ground cereal grains and water, and may have been developed by accidental cooking or deliberate experimentation with water and grain flour. Descendants of this early bread are still commonly made from various grains in many parts of the world today.

Treatise on the Mass (from the Stowe Missal), Part 02 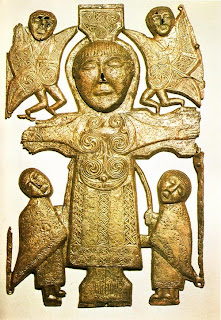 The elevation of the chalice, after the full uncovering thereof, quando canitur Oblata (when Oblata is chanted), that is a memorial of the birth of Christ and of His exaltation through signs and miracles.
Quando canitur: Accepit Iesus panem (When is chanted: 'Jesus took bread'), the priest bows himself down thrice to repent of his sins. He offers them [i.e. the bread and chalice] to God, and the people prostrates: and there comes not a sound then, that it disturb not the priest, for it is his duty that his mind separate not contra Deum ('against', i.e. from, God) whist he chants this Lection. It is from this that Periculosa Oratio (the Most Dangerous Prayer) is its nomen (name).
The three steps which the ordained man stepps backwards and which he steps in return, that is the triad wherein sins any person, to wit, in word, in thought, in deed; and that is the triad through which he is renewed iterum (again) and by which he is moved to the Body of Christ.

Remember when I actually posted something?

For all those wondering, no, I'm not dead. It's just that real life is a very harsh taskmaster and has been giving me quite a load to do. To be honest, I can't promise to be able to write another blog post these days - that does not mean however that I've quit this blog. Who knows? I might be able to churn out something quick if I have adequate time and motivation.

For the record, E.G. Atchley's translation of the liturgy of Ordo Romanus I is now up. Well, it's the very least I could do to nominally keep this blog up and running.

Email ThisBlogThis!Share to TwitterShare to FacebookShare to Pinterest
Labels: Blog

Treatise on the Mass (from the Stowe Missal), Part 01

The Stowe Missal is a missal written in Latin and Gaelic which was transcribed at Lorrha Monastery in the ninth century. Also known as the Lorrha Missal, it is known as the 'Stowe' Missal due to its acquisition by one of the Dukes of Buckingham for the Stowe manuscripts collection. Stowe House was sold in 1849 to the Earl of Ashburnham. In 1883 the missal was purchased by the British Government and deposited in the Royal Irish Academy.

The form of the liturgy and the services of baptism and unction reflect a Celtic usage dating from before 650 AD. Whether this is the usage brought by St. Patrick in the early fifth century, or a later revision is not certain. Used during an era in which Christianity was neither universal nor fully understood, it asserts in detail the redemptive nature of Jesus Christ's birth, death and resurrection. The writer(s) assumes that those participating in the Eucharist must have every detail repeated clearly.

Here we are going to look upon a tract on the Mass (folios 65-67) written in Old Irish. I would first provide the original Gaelic and Latin text (as it appears in the Missal), a more 'tidied up' version (with proper spacings and punctuations), and an English translation.

Beneventan chant is a liturgical plainchant repertory of the Catholic Church, used primarily in the orbit of the southern Italian ecclesiastical centers of Benevento and Montecassino, distinct from Gregorian chant and related to Ambrosian chant. It was officially supplanted by Gregorian chant in the 11th century, although a few chants of local interest remained in use.

Here is a sample of Beneventan Chant from Youtube: Otin to Stauron - O Quando in Cruce, sung by Ensemble Organum in Greek and Latin, from their album, Chants de la Cathédrale de Benevento: Semaine Sainte & Pâque.


What is interesting is that three bilingual (Greek and Latin) antiphons, of this is but one, were sung in Benevento and some other Italian centres as part of the Adoration of the Cross service in Holy Week. Some of these chants seem to have Eastern origins: this particular sample for instance, found in sources from places such as Benevento and Ravenna, is actually a version of a Byzantine troparion which can be followed back to the rite of Jerusalem in the 7th century. Its presence in Ravenna should mean that it was already used in the liturgy there before the fall of the Exarchate of Ravenna to the Lombards in 752.

The Latin text of the pre-Conciliar Mass according to the Ambrosian Rite now has its own page.
Posted by Patrick at 5:00:00 PM 1 comment:

Featured Stuff or Sumthin' of the Sort

Scripture and Other Related Topics

Other Links of a Religious Nature

Links of a (Mainly) Non-Religious Nature

This Blog is under the patronages of...(click on link to see image) 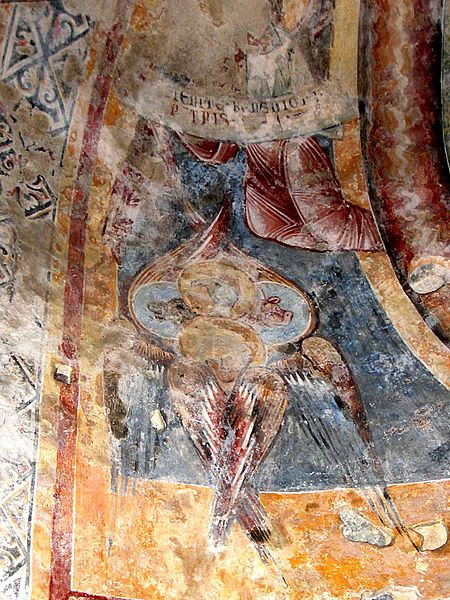 We, who mystically represent the Cherubim, and who sing to the life-giving Trinity the thrice-holy hymn, let us now lay aside all earthly cares that we may receive the King of all, who comes invisibly borne aloft by the angelic hosts. Alleluia, Alleluia, Alleluia. 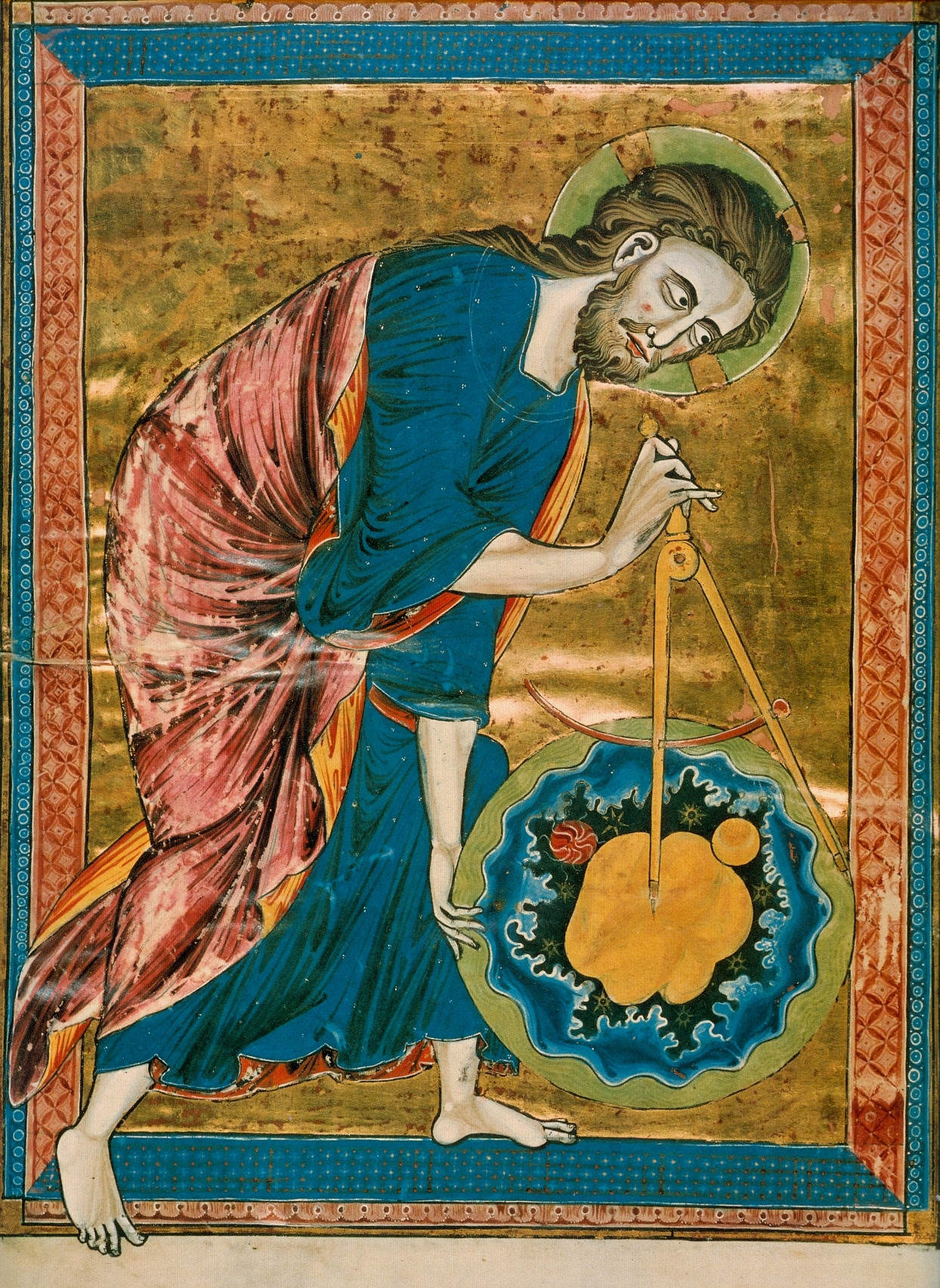 We praise thee, O God: we acknowledge thee to be the Lord. All the earth doth worship thee: the Father everlasting. To thee all Angels cry aloud: the Heavens, and all the Powers therein. To thee Cherubim and Seraphim continually do cry, Holy, Holy, Holy: Lord God of Sabaoth; Heaven and earth are full of the Majesty of thy glory.

Pray for the Holy Father and his intentions 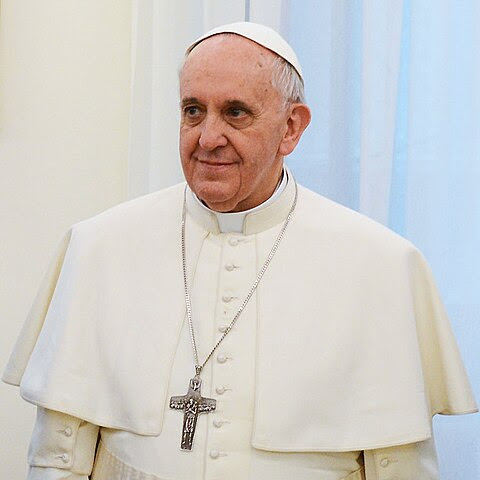 I support the Extraordinary Form of the Roman Rite according to the Missal of Bl. Pope John XXIII

'Ancient' does not mean 'bad'

"Read the red if you would understand the black"

- I do not necessarily agree to ALL of the opinions contained on sites that I link to.

- Opinions posted in this site are personal opinions of the blogger (i.e., me) unless stated otherwise.

- You can use whatever content you want from this site for personal use, provided you give credit where credit is due - i.e. link here or if not possible, state your source. Please, DO NOT ever try to steal and claim them as your own work.