For example, as mentioned in Part 01, you have three versions of Greek Tobit: Greek I or G1 found in most manuscripts, Greek II or G2 found in Codex Sinaiticus (4th century) and a couple other manuscripts, and Greek III or G3 (a sort of intermediate version between G1 and G2, although basically related to the latter), surviving only in a partial form in three manuscripts. As for Latin Tobit, you have Jerome's translation (of a translation of an Aramaic version, quite different from the Greek version), plus a family of Latin translations made before his (Vetus Latina = VL), which is quite similar to the text of GII. That's not counting medieval Hebrew and Aramaic versions (which are all derived from the Greek or the Vulgate text anyway) and ancient versions in other languages like Syriac, Ethiopian, Armenian or Arabic (many of them simply translations of G1). For the purposes of our discussion, I'm gonna focus specifically on G1, G2, and the VL versions.

I mentioned in the last post that until the mid-20th century, the preferred version of choice for translators was either G1 or Jerome's Latin version, because those are pretty much the only ones available. After manuscripts like Codex Sinaiticus were discovered, scholars became aware of longer versions of Tobit quite different from the ones they had, but a number of them originally dismissed these versions as secondary. After all, it's a cliche in textual criticism that lectio brevior est potior, "shorter reading is better." Many scholars at the time assumed that G1, the 'standard' version found in most surviving copies, represented the original version of Tobit, while the 'minority' G2 text in Sinaiticus and the Vetus Latina versions were expanded versions of it. Then, the Dead Sea Scrolls were discovered, which required some changes in established opinion.

﻿﻿
When Cave 4 in Qumran was discovered in 1952, among the things found inside there were fragments from five manuscripts of Tobit (4Q196-200), dating from the period between 100 BC to AD 25. However, it was not until 1956 that the first report on the finds was published. The late J.T. Milik reported about the discovery of what was then fragments three manuscripts of Tobit in the report. More fragments were eventually found (which was also announced by Milik) until five texts were found in total. However, while Milik worked on piecing the fragments from a period spanning from 1953 to 1960, he never got around to actually publishing them. (One of the main criticisms levelled against Milik by critics, in fact, is how he contributed to the long delay of getting the Dead Sea Scrolls into public view by not completing all the work on his portion - and quite an amount of the discovered fragments were under his lot.) It was Fr. Joseph Fitzmyer who would complete the work and publish them in 1995 (Discoveries in the Judaean Desert, volume 19).
﻿﻿
All in all, these manuscripts (four in Aramaic, one - the latest - in Hebrew) generally agree with G2, but sometimes also with G1. In some instances, the text provided could be shorter or longer, or at times agree more with the text of VL over against G2. All in all there are sixty-nine fragments or groups of fragments in these five texts (anyone who wants to see them in detail should check out Fr. Fitzmyer's books like The Dead Sea Scrolls and Christian Origins or his commentary on Tobit): out of these sixty-nine, thirty-four tiny fragments are unidentified, giving us thirty-five identified fragments in total.

These fragments also exhibit some degree of minor variances with each other, which shows us that there was not really a 'fixed' text of Tobit during the 1st century BC or the 1st century AD. Disagreement still exists among scholars as to whether Tobit was composed in Aramaic (the common opinion today) or in Hebrew, but either way, it seems that versions in both languages circulated at the same time. In any case, knowledge of any Hebrew version was already lost during the 3rd century, since Origen notes: "Concerning it [Tobit], we must recognize that Jews do not use Tobit; nor do they use Judith. They do not have them even among the Apocrypha in Hebrew, as we know, having learned (this) from them. But because the churches use Tobit, one must recognize that some of the captives in their captivity became rich and well to do." (Epistola ad Africanum 13 [19]) By contrast, Jerome's use of an Aramaic version shows us that versions in that language still continued to circulate in his time. 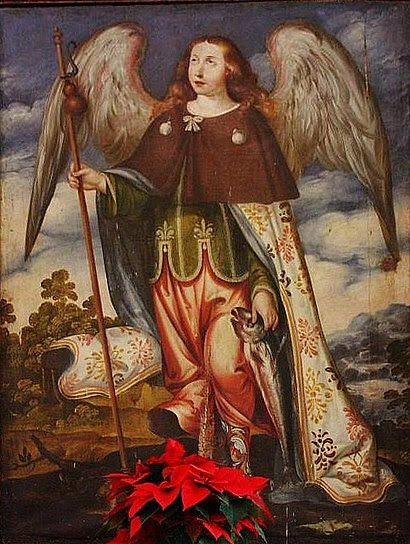 Since the text of G2 and VL is found to align closer with the Aramaic and Hebrew fragments from Qumran, it is presently deemed by most scholars to be the more original of the two Greek texts. Now, G2 is though to be the more 'original' version, while G1 is a more streamlined, condensed epitome. (G1 is more smooth and more natural compared to G2, which is very Semitic to the point of being cumbersome.) Hence, most modern translations since 1966 tend to use the text of G2 nowadays as their base text for Tobit, although a few still choose to follow G1.
Now here's the fun part. How do you know whether your translation of Tobit uses G1 or G2? (The Vulgate version is pretty easy to spot by comparison: just pick a Douai-Rheims or any translation which uses the Vulgate as source text.) There's actually quite a number of ways to do so, but one I found to be quite fun involves looking at some key passages. I'm gonna list three of them:
Out of Bible translations in English which translate Tobit, those which use G2 are mainly modern ones like the New American Bible (NAB), the New Jerusalem Bible (NJB), the New Revised Standard Version (NRSV), the Common English Bible (CEB), the Good News Translation (GNT). Older translations, like the RSV, the Revised Version (RV), the King James Version or even Lancelot Brenton's translation of the Septuagint use G1. Modern Bibles which still use G1 include the World English Bible and the Orthodox Study Bible. The so-called Christian Community Bible is a bit confusing: its translation seems to be a fusion between G1 and G2. The Douai-Rheims - both the original and the version by bishop Challoner being passed around as 'Douay-Rheims' these days - obviously use the Vulgate version. (Note: the translation of Tobit in the Nova Vulgata isn't Jerome's, but a fresh translation of G2 with some influences from Vetus Latina texts.)

Historically speaking, most early English translations from Wycliff up to the Douai Old Testament used the Vulgate text. The only ones which used G1 were the Geneva Bible and the KJV.
Patrick at 9:37:00 AM
Share